TRANSPOZISION. In the Fine Art vernacular, transposition refers to a restoration technique. It is one which consists of replacing the original artistic medium of a deteriorated painting with a new medium.
TRANSPOZISION. In Gaël Froget’s vernacular, it speaks of permutations, but also of the shifts in the artist’s practices over the last decade.
After his solo exhibition of 2015, the artist reckoned that the moment – and especially the need – had come to direct his work towards unexplored territories. All in an effort to create a mindful link with a diversity of resources which have been scattered throughout the history of Art. Gaël Froget thus delves into the past, assimilating the creativity of Man and the profound genius that some have offered the world of Art. The artist immerses himself in mainstream currents and movements – often disquieting – of Fine Art over the centuries. A structured academic journey is henceforth set in motion. Amidst this voyage, Gaël Froget explores his experimental and observational skills, combined with new creative techniques. His dense itinerary paves its way across street art, pop art, abstract art, expressionism or calligraphy. The influence of the expressionist movements of the 1960s, that of Korean art, Pierre Soulages’s “Outrenoir”, or Rothko’s colour fields allow him to deconstruct his own work, to minimise certain aspects of it, and to put forth the vibrant and the primordial. He exchanges with the local art scene, spending a considerable amount of time with artist friends, from whom he constantly draws inspiration. Gaël Froget positions the human being at the heart of his musings, his direct influences, his creative process and communication. 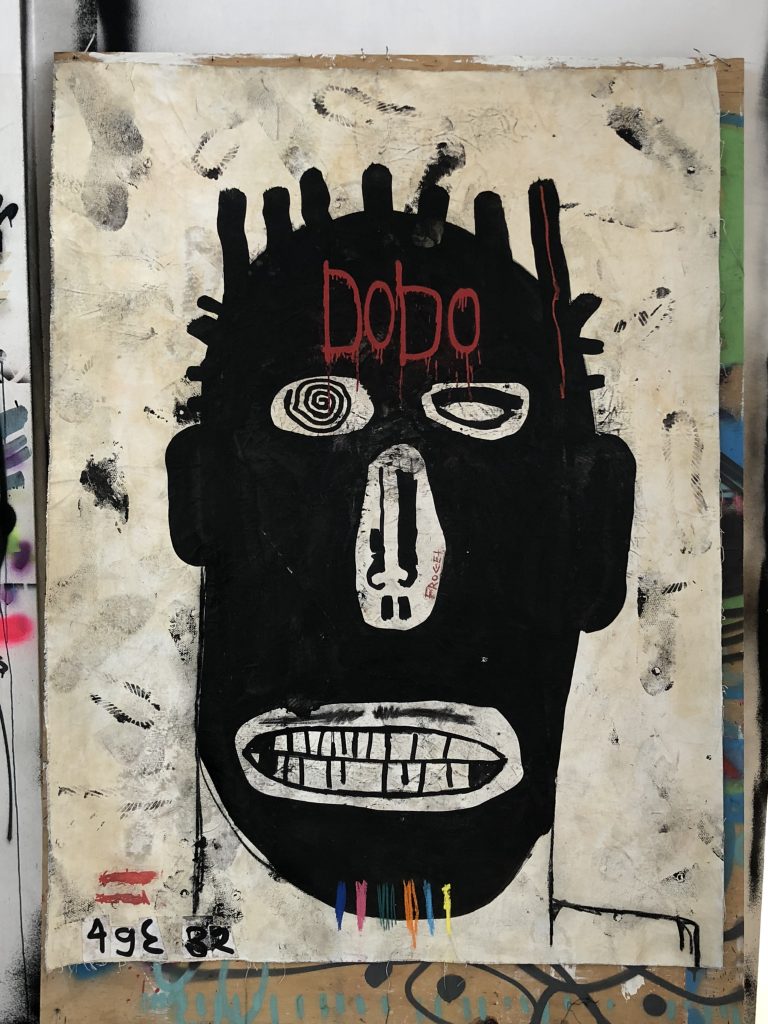 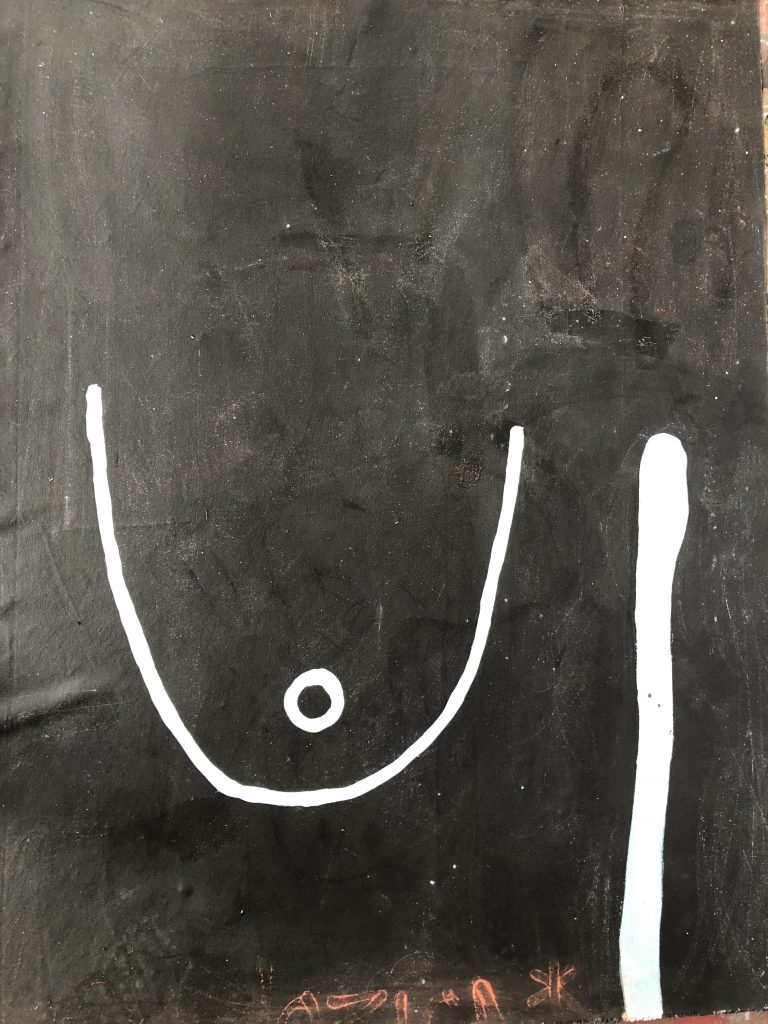 Therefore arises a detachment from his original free, marginal and spontaneous painting. The artist constructs a modified, more reflective and more challenging work environment. He does so without prohibiting himself to participate in collective and experimental exhibitions – such as at the “Cité Mécanique” exhibition in 2017; and Vandalise This!, a duo exhibition with Yoshi Its at the Miaja Gallery in Singapore – Gaël Froget uses his passionate research to enable the reinvention of his own style. His raw visual identity blended with newly chartered territory leads to a form of semi-abstract art.
To discover a fluid artistic practice; to grasp each fragment of contemporary artists’ eclectic universe; to dexterously uncover the spaces where change has taken place; that is, in part, the invitation sent to the explorers of this exhibition. Gaël Froget will never paint as he did in the past. Each movement, each choice of colour, or form will be an integral part of his pictorial reflection. 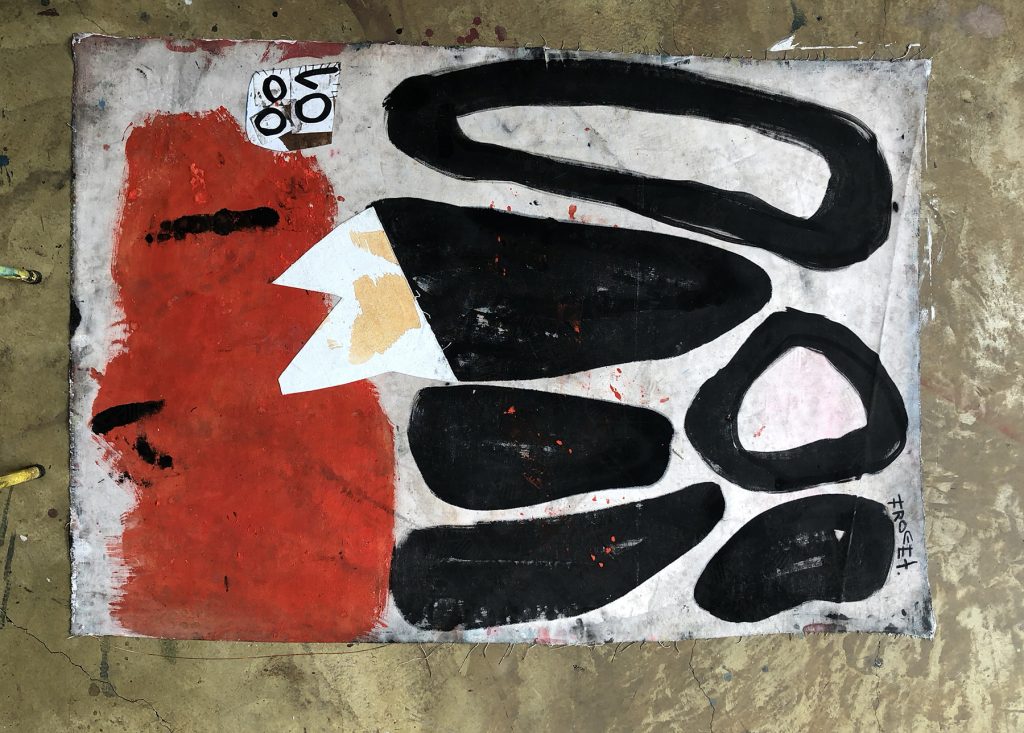 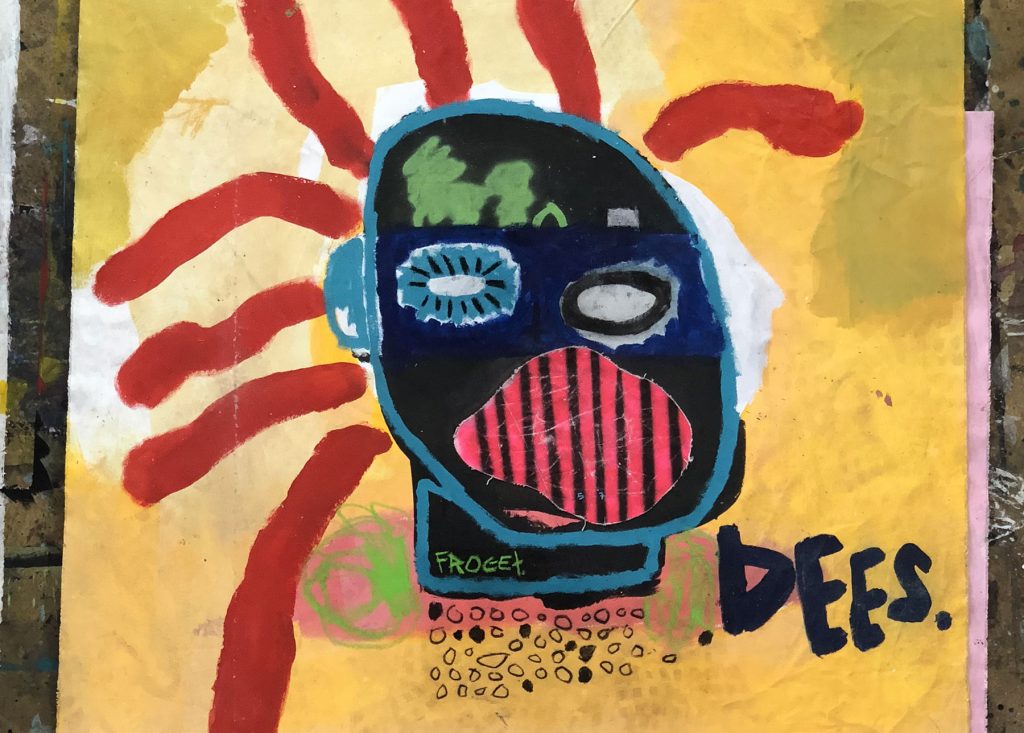 He proposes an evolving collection, where the preserved layers become unique details of his new artwork. The creation takes place amidst a subtle balance between anticipated movement and the moment’s emotion. Similar to the “Support / Surfaces” movement, which counts Claude Viallat as one of its founders, Gaël gives equal importance to the artistic media, the materials, the creative gestures and the final piece. We see a split from his past work, close to graphic design and illustration, and this new universe. A universe which constantly shifts between his primitive and tribal roots and his fresh alluring abstract reflection, through each of its features and colours; a domain that leads to an exploration of emotions, and which simultaneously offers compositions that mix multiple stories. Stories, sometimes personal, and always close to people. Bereft from the bother of being an ensemble, each artwork affirms its narration and its individual history. It is a return to form that expresses itself freely, with a new vision of space and volume. This is the starting point of new subtleties that constitute a whole. Ebbed on a few distinct axes, sometimes echoing the pictorial movement of Malcolm de Chazal, its backgrounds stand out and are structured to better adapt and accommodate its forms. A few distinct pieces – such as this monumental work, PVC-mounted and built with tar spray and lacquered paint – evoke an ambivalence: this point between the past and the future where purification took its role to heart, becoming the source of each space and each singular composition. It is the first time that the artist Gaël Froget works entirely on canvas; these are coated and then conceptualised on the ground. Out of their frames – to better see and imagine them – they offer the artist the opportunity to dream and create unrestrained; having unadulterated fun and living his art as a game, real and connected to the land on which he chooses to live his mad adventure. The unhitched canvas becomes part of the creative process; first dragged on the floor, then nailed on wood as an object or installed in kakemono, it reveals the experiments of lacquered paint, oils, varnishes, plaster, coatings, acrylic, pastels, Sumi ink, bombs, Posca markers, and diverse sanding techniques. The artist trifles with established norms and mistreats his canvases to better appropriate them and give each one a new skin; as Miró during his “crime positif” (positive crime), he burns, scores, lives daily with these large works that cover the floor of his studio at Avenue Pasteur Quatre Bornes. Reminiscent of Fontana’s work, the paintings are lacerated and open at random. The artist mixes and melds them, as they become the supports of other works through organic chemistry, multiple collage processes and sewing by hand. Seeking to find wall-like effects in matter and texture, Gaël Froget delivers a quasi-unconscious account of his origins: the need to know where he comes from, where it all began; in graffiti, in ‘vandalism ‘, in raw street art, which is made for the world to behold. 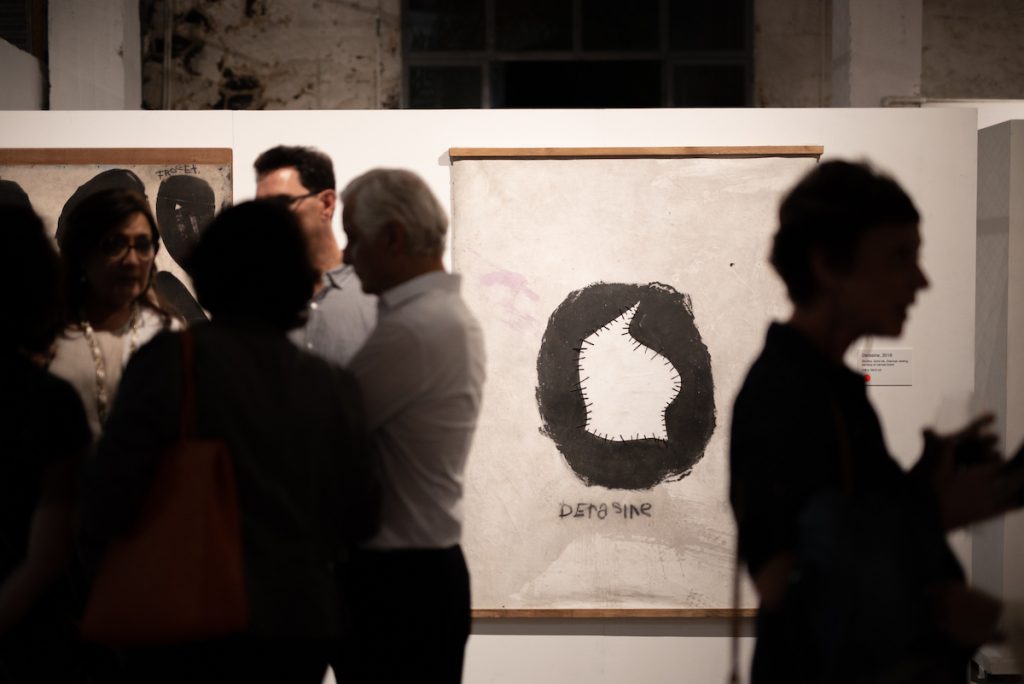 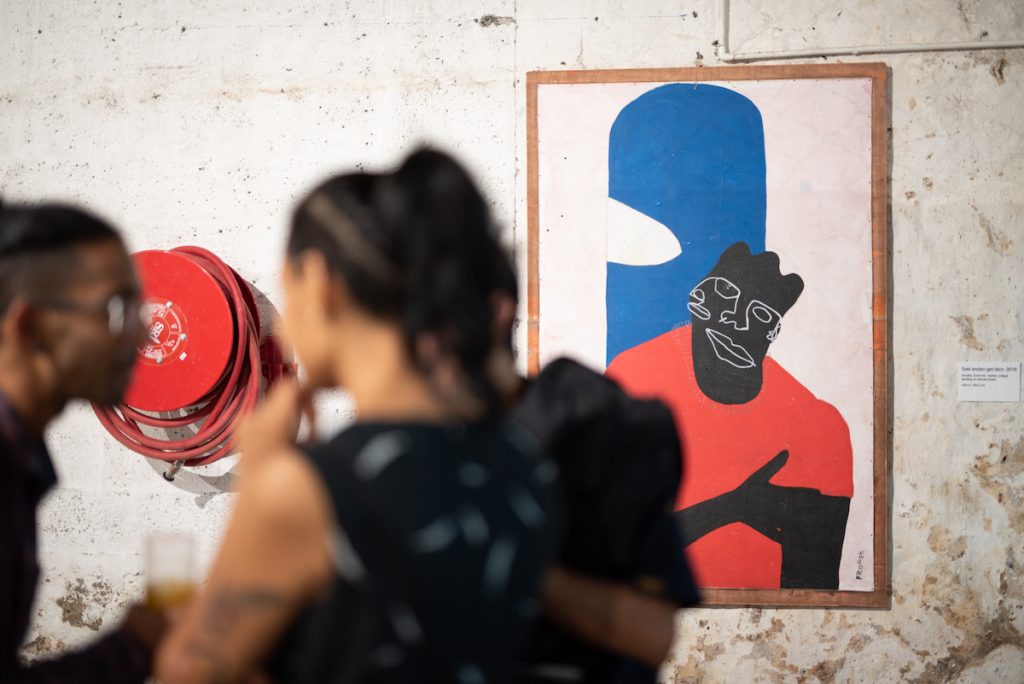 The work of Gaël Froget belongs to the streets indeed; it is intimately linked to human life; to him, art reflects the philosophy of a country and that of its people. He cherishes his roots, and also inebriates us with dreams of mainland Africa, which have pigmented his adolescence. This gigantic continent so close and sometimes a little too far from our island has dictated his artistic practice since the beginning; “We all have some Africa in us,” says the artist. This is perhaps why the common theme of his work remains intrinsically primitive, and also echoes artisanal craftsmanship; this straightforward language confirms what is nowadays becoming evident, and it reveals itself as Gaël’s inherent approach to Fine Art.
The needlework stands out; before the discovery of Fine Art, the artist worked (and studied) in the world of fashion. Despite his desire to get rid of it for a while, this particular creative process is catching up with him now. A candid tribute to a starting point, but also a process of assembly referring to the history of humankind, cultures and rituals. Sewing is ubiquitous. It is and has been present everywhere and at all times, and is linked to civilisations and their daily lives.
The writing of words, loving the expressions of his native Creole language, with its rhythmic accent. “I make an art that I understand,” says the autodidact. The obvious art, the one close to others, and in communication with them; the art that has an efficacious function, evocative of Emil Nolde’s, fascinated by traditional African sculpture, with its grotesque expressions full of strength and life with a perfectly simplified form, as well as its absolute authentic character. This is how Gaël’s painting becomes Mauritian, naturally. Because he realises that the desire to go elsewhere holds no triumph over the wealth that comes from his native land, because he knows that it is here that he sees the birth of his paintings’ natural energy, and because he recognises, above all else, the importance of not being from anywhere. He began his career by creating without really being aware that he was creating art, or that his work could have interested his audience. Today the vehicle is undergoing a metamorphosis, but the discourse remains the same. Life is a joyous entertainment during which it is good to harness the freedom to actually live, and be what you are. His art – like that of Miró and Picasso – is like a child’s activity. It belongs to the local culture, telling a singular story, articulating intangible imagery, resembling the movements of an entire people, shown on canvas. Deflecting exoticism to tinker with the meaning of words, statements, and amalgamated techniques, the art of Gaël Froget is inexorably as it is and as it wants to be. 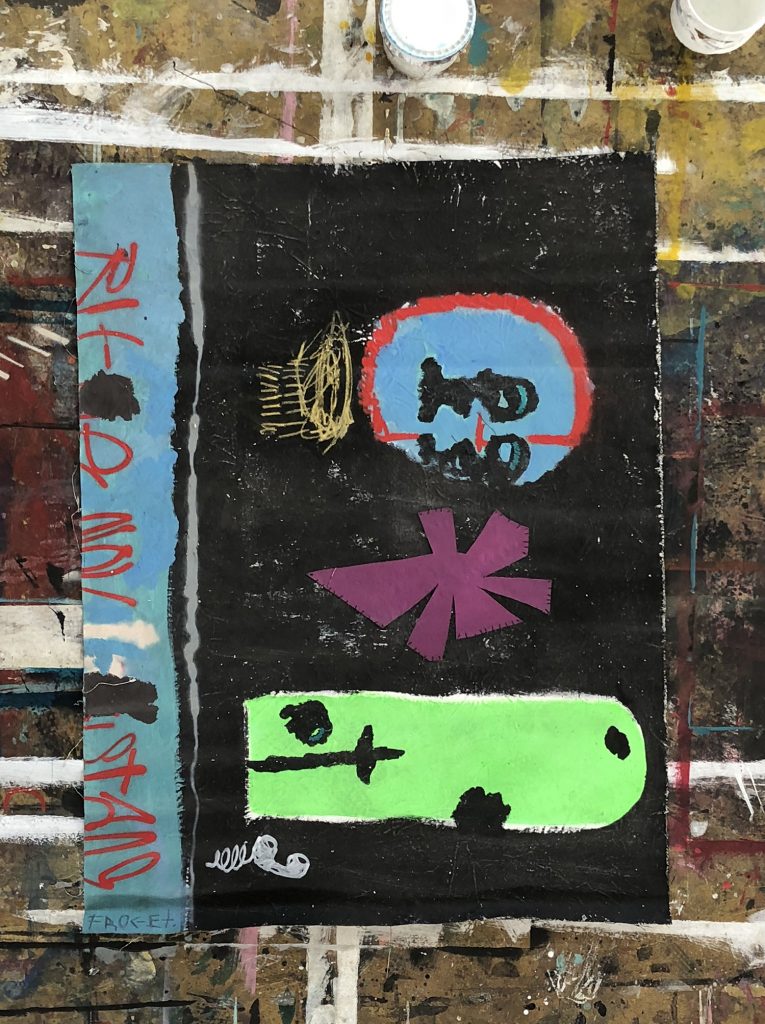 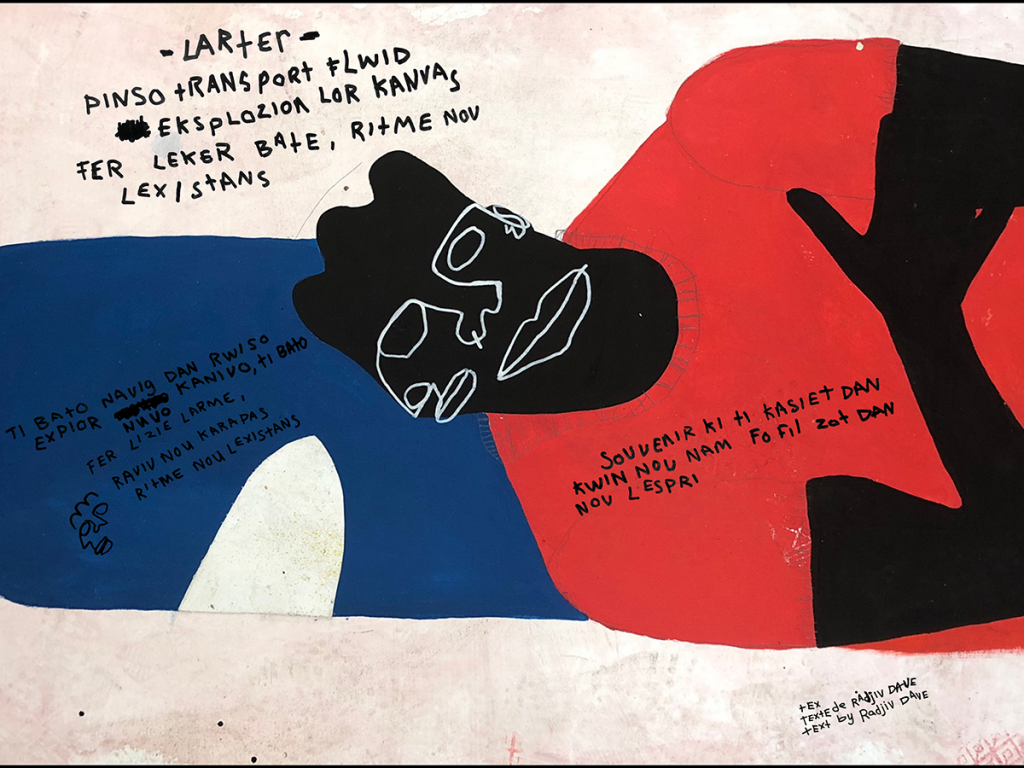