By Djun Dulloo and Khalid Nazroo

Intertwining the artwork of two Mauritian artists with a generation-blending approach is indeed a whole adventure that begins. Two generations, thirty years apart to be precise. One born in 1953, the other in 1983. Both on the same island. Both sharing the desire to experience painting until running out of breath and the desire to live from painting. Learn, work, produce, show, collaborate, then teach others, share and continue to learn, again, and explore to infinity. It therefore seems obvious to us to place them side by side, face to face in order to better embrace them, to better realise that painting, together with colour that brings it to life, are both universal, and that they are both ageless. Without limits to exploration, without borders, their territory is the whole of humanity. They live beyond us, beyond time. They bear witness to mankind, his passage, his sensitivity, what he has seen, what he has experienced, what he chooses to express, what legacy he chooses to leave, what he chooses to pose and to freeze on canvas or paper. That is why this choice was not really one, in the end. It seemed essential, even mandatory, to one day present these two artists together in their native land. There is communication between their art without them really realizing it. Is this due to the laws of the universe or the laws of a happy coincidence? We choose to say it is all self-evident. For here is where this combination is affirmed, for Khalid Nazroo and Djun Dulloo who, using colours, show hybridity, belonging, history, symbols, and the surrounding life that never ceases to amaze.

Cézanne said “the material that I wanted to copy, I couldn’t get there. But I was happy with myself when I discovered that I had to represent it using something else… using colour.” In his artistic practice, Djun Dulloo uses a range that goes from transparency to opacity. He overlaps layers of paint without trying to cover the traces left by his tool, traces that bring up his gesture and the involvement of his body. He readily comes up with new instruments that enable him to apply colour to the canvas in a random way. Whether using a handyman brush or a spatula, the traces left create lines and borders that get “eaten away” by time. He uses his painter’s palette in an unhesitatingly innovative way, covering it with colour then spreading it and stretching it out, thus creating glazes. This combination of colour and matter then sometimes covers, or sometimes reveals the previous layers.

In Khalid Nazroo’s work, the tool used, whatever it is, is also made visible. He leaves clues that are specific to his handling and his presence can be felt in the entirety of his work. He is not blinded by one single technique; he blithely mixes techniques related to painting, drawing and engraving. It is by addressing these different artistic fields that he radically enhances his practice. Allowing for paint-free areas to live in his paintings, the grain of the canvas or paper, its texture, its very materiality, are thus revealed. Some of Matisse’s paintings then come to mind, whose purpose was nothing less than to affirm the two-dimensionality of the canvas as well as its planeness. In the pieces of both artists, a few old layers emerge, in some places, suggesting the length of implementation, the duration of the work, and simultaneously alluding to the emergence of buried memories, liberated by the artist’s gesture and expression.

Both artists feel with colour, through which their paintings are organized. In Khalid’s work, time is present through the superposition of layers, but also through the use of the very technique of series: a series of organic landscapes, a series of almost abstract paintings whose subject is none other than colour, prints of monotypes giving rise to the “Rhythm” and “Summer” series. Indeed, does not every series induce a reference to time, since it unfolds over time? In Djun’s artworks, time is present through the multitude of layers that overlap, but also through the dripping technique used in some of his canvases or through their execution time. The work of our artists, in their relationship to time, in the freedom of their gesture, in the exuberance of saturated, contrasting, bright colours but also sometimes excessively dark, reminds us of those of Cy Twombly and Jean-Michel Basquiat. Fernand Léger in “Extrait de La peinture murale, Fonctions de la peinture”, tells us that “colour is true, realistic, emotional in itself without the obligation to be closely linked to a sky, a tree, a flower, it is valuable in itself as a musical symphony, it is a visual symphony, either harmony or violence, it must be accepted as such.”

In his unique symphony, Khalid Nazroo willingly uses contour and rings to create shapes, but he sometimes also uses these lines to punctuate the space of the canvas, a space that he structures by breaking it up, fragmenting it again and again. In “The Steps”, some pieces of the ‘puzzle’ developed by the artist seem to escape from the initial frame, thus allowing themselves out of range. In “Black Head” or “Blind Eye”, on the other hand, some parts seem to have disappeared, leaving gaps within the virtual rectangular space defined by the other fragments. By doing so, he questions the format and framework used as traditional norms. In Djun Dulloo’s work, the outline frequently highlights a shape, which then appears on a more or less flat background, as in “Tizan Gato Kanet” and “Highway Love”. In other artworks such as “Patous Lampoulso ok!”, readability is put to the test when the artist treats form and content in the same way, in a very gestural and very free way, the figure thus being made visible only through the ring that defines it. We cannot see such images without mentioning the “Femmes” series from Willem de Kooning, whose issues seem quite similar.

Khalid is an innovative artist in painting, photography, engraving and sculpture. His obsession with colour is as perceptible in his brightly coloured canvases as in his pastels and even in his monotypes. In Khalid’s works, the superposition of coloured areas and small quick touches, the unexpected associations of colours, the juxtaposition of complementary colours, all create transparencies, fringes, improbable vibrations, that are favourable to reverie. Then there is the use of motifs, the taste for simplified forms, the freedom of the brush and the bright colours, which, even if not precisely mentioning Matisse, nevertheless testify to the artist’s attachment to this great Master of the 20th century.

Djun’s work also avoids the idea of being frozen in terms of creative process. On the one hand, the artist moves back and forth between the automatism of his gesture, his taste for coincidence and for more constructed and structured techniques. On the other hand, he simply sweeps away time and space, weaving links with Art History and referring to Matisse, Picasso, from whom he takes up certain questions, when he does not choose to clearly mention emblematic works, such as Vinci’s “La Cène” or Manet’s “L’Olympia”. Finally, in other artworks, Djun integrates images, photos, and even copies of digital archives (such as in “Sieste avec Papaye” and “Luxe, Calme et Volupté,” where we can see a real tribute to Matisse).

Creole and African popular cultures are reflected in Djun’s diversified artworks, along with a reflection on the Western culture, as well as on many universal myths, which he has addressed over time. Similarly, Khalid’s links with Africa, Asia and a multitude of other countries reflect the many journeys of this discoverer-researcher. Memories from here and elsewhere, from yesterday and today are intertwined in the work of these World Citizens Djun Dulloo and Khalid Nazroo, eclectic artists who multiply languages, blend techniques, transgress categories, and work on memory, between recovery and erasure, through raw, powerful and colourful images.

In the work of this duo, the era where we set rules is long gone. There is no practical recipe if we exclude industrial art. This is their way of reinventing themselves and outdoing themselves with every new production, every exhibited series, no longer really seeking to understand each other but to merge through their art. No longer wondering where they are going, Khalid Nazroo and Djun Dulloo know that they live with matter and its multiple possibilities and that they confront colour to better express it. 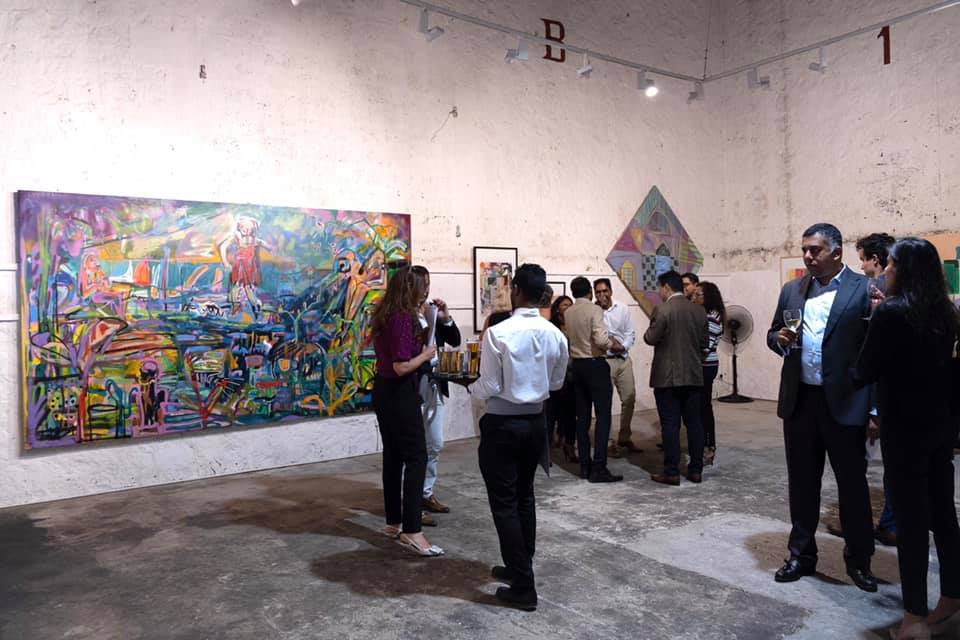 Copyright 2022 © All rights Reserved. Design by The Fabrik Digital